Last month, I toured Poland with our outreach band The Gap Theory, sharing the gospel with hundreds of people in concerts at public music festivals, a camp for students learning English, a church youth outreach, etc. We even played a couple of nights at a pub in the town square of Poznan, where we got into some really good spiritual conversations with people who actually came back the second night to talk more and hang out with us.

The tour was a partnership with Next Generation Missions (NGM), an organization run by Richard and Brenda Dietrich. The Dietrichs are U.S. citizens who discovered 14 years ago that they are in the line of succession of Poland’s royal von Promnitz family, which was thought to have been extinguished generations ago. Having discovered this, they were given the royal titles of Count and Countess and Richard was knighted. Poland is now a democracy, not a monarchy, so their titles do not confer any governmental authority, but it does give them a LOT of influence and connections in various circles. As Richard will tell you, he may be a Count in Poland, but he wants to use his leverage to introduce people to the true King of Kings! NGM’s main focus is to bring over artists (bands, instrumentalists, choirs, etc.) to tour and share the gospel. 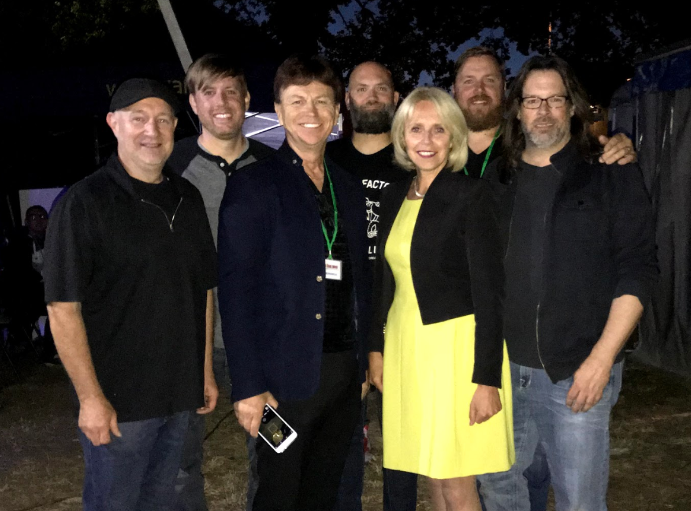 (Above: The Gap Theory performing at the ‘Zary Days’ Music Festival in Zary, Poland. Right:  The Gap Theory and the Count along with Danuta Madej, the Mayor of Zary, after the show.)

Richard and the NGM folks are very moved by how we weave the gospel and our stories into our shows in a way that non-Christian audiences can relate to. We talked a LOT with them about the long-term work of making disciples and how they might interface with Cru’s ministry staff in Poland. We want to make sure there can be follow-up with the people we share the gospel with, to connect them with other believers and churches.

Our tour manager and translator was a Polish Christian named Aga. She has worked with NGM for years, helping all the artists on their tours, and also served as our cultural liaison, helping us appreciate Polish history and culture. On the last day of our tour, we were talking about the kind of ministry we’d like to see for future tours, and she told us “…in 10 years of bringing over Christian artists and bands, no one except for you has ever asked about follow-up”.

So not only did we benefit from Richard’s connections, we’re working to find ways NGM can benefit from our connections and expertise as well. We’re excited to incorporate long-term disciple-making into our combined efforts. The partnership is very much in its infancy, but I imagine we’ll be sending bands back to work with them in the future.

Your partnership with us made it possible for us to proclaim the Gospel in Poland, and to develop a new strategic partnership – thanks!!

Please pray…
…for the people were ministered to in Poland, that they would continue to sense God’s pursuit of them. Also, pray for wisdom as we develop the partnership and enable greater long-term efforts. This was a good start and there is a lot of potential – but it takes prayer, planning and commitment to turn potential into reality.

Just getting in a little camera time with @stratma

Some times, a good day in the studio means you jus

My only direction to the @winterconf worship team

Spending the weekend producing the live music for

Well, #HelixLT, it was a good four-year run. There

Any day in the studio is a good day, especially if

Probably my favorite moment from the Indianapolis